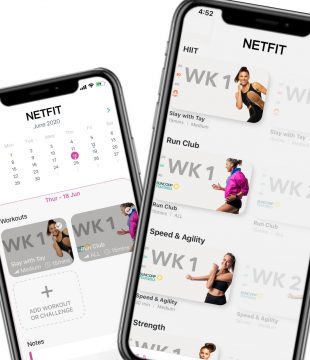 Netball Continues To Put Participants First In Their Return To Play

NETBALL CONTINUES TO PUT PARTICIPANTS FIRST IN THEIR RETURN TO PLAY

Following on from the success of their recent Suncorp Team Girls Virtual Online Clinics, NETFIT Netball and Netball Australia have again joined forces to bring the netballing community two additional high-class programs, providing tweens, teens and coaches with the opportunity to upskill and remain active, all at the touch of a button and free of charge.

Netball Australia CEO Marne Fechner is delighted to continue working with NETFIT, Suncorp, Origin Energy and Woolworths to deliver free online sessions to netballers as they prepare to return to the court.

“The benefits of physical activity on the mental health and wellbeing of young people, particularly young women, is immense, so we are proud to be able to continue providing netballers from around Australia and the world with the option to stay active at home,” she said.

“Over the past nine weeks, when many of us have been staying safe at home, the Suncorp Team Girls Online Virtual Clinics received millions of views, and it’s great to now be getting our netballers ready to return to the courts through the Suncorp Get Ready Program and the Origin Good Energy Comeback Challenge.”

Off the back of the success of the Virtual Clinics key patrons of Netball in Australia, Suncorp, Origin Energy and Woolworths, all jumped at the next opportunity to support the netballing community as they build towards a return to play.

The first of the two FREE offerings between Netball Australia and NETFIT Netball is the Suncorp-sponsored “Get Ready” Program which centres around budding young, country netballer NETFIT Matea, who takes you through all of her skills, drills and workouts with a little help from her friends. Those “friends” come in the form of Suncorp Super League stars Maddy Proud, Verity Charles and Liz Waton as-well as the NETFIT team of Sarah Wall, Kim Green and Taylah Davies.

Co-host of the Get Ready Program, former elite netballer and NETFIT Netball founder, Sarah Wall speaks of filling such an important need for kids, particularly with the school holidays fast-approaching “We were blown away with the success of the Virtual Clinics that we developed with Netball Australia and are so excited that Suncorp, Origin Energy and Woolworths chose to action a follow-up fitness and health-based program.” Wall further added “The engagement that we received from so many young people, thankful that they had netball-related options in isolation, was so heartening in what was a bold decision at the time. We’re really proud of what we created together with Netball Australia, Suncorp, Origin Energy & Woolworths.”

With some competitions returning to play around the country, and school-based netball mooted to return in some States and Territories, former Australian Diamond and dual World Champion Kim Green felt that the teen-plus market needed fitness conditioning and skills sessions to bring them back up to speed quickly. The Origin “Good Energy” Comeback Challenge is exactly that, providing netballers with graduated fitness conditioning, strength and pilates sessions as well as specialist skills tips to improve their game. “The Origin “Good Energy” Comeback Challenge ticks every box in helping all netballer’s get back on court, in the best condition possible. We have skills and coaching sessions, agility and speed classes, a specific “Run-Club”, pilates and nutritional advice and cooking segments.

”The Comeback Challenge has been designed with sports-scientists, dieticians and elite-level players and coaches and has been tailored to suit all ages, abilities and fitness levels. You can go at your own pace, but see the progression in your training program.” Green further added “When you’ve got the likes of Laura Langman instructing you from home, I found myself watching really closely to see what advantages I could get out of her sessions”

Both the Suncorp Team Girls “Get Ready” Program and the Origin “Good Energy” Comeback Challenge start at 6pm, Monday the 22nd June, with the content available on the NETFIT Netball App or via their On-Demand platform on www.ondemand.netfitnetball.com

PrevPreviousNETFIT Netball in ACT
NextWill Netball be at the 2032 Summer Olympic Games?Next