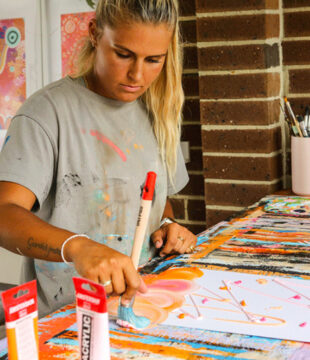 From The Court To Creativity with Bayley Mifsud

From the court to a creative artist, discover Bayley Misfud’s journey as an Indigenous artist and netball player. 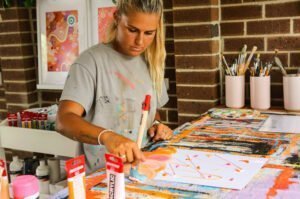 Indigenous artist Bayley Mifsud is a proud Kirrae and Peek Wurrong woman of the Gundjitmara nation in South-West Victoria. Bayley’s Aboriginal and art name is Merindah-Gunya meaning “Beautiful Spirit” in Peek Wurrong language. This name was gifted to her by her parents and Elders in a ceremony.

Bayley began creating Aboriginal art at the age of 5, learning from her Elders at the Brambuk Aboriginal Cultural Centre in the Grampians. Like most children, she never had the opportunity to learn Indigenous art throughout her schooling. “During High School, I did multiple art subjects and in Year 11 was given a project with “Identity” as the theme. This was the first chance in school I had to show the beautiful meaning and history behind Aboriginal art” Bayley explained.

Bayley’s netball journey began when she was just seven years old when she moved to Melbourne in 2005. “I lived across from the Thomas Street courts in Hampton and heard the umpire whistles one morning and asked my mum if I could join a team. Both my mum and nan are huge netball people and played all their lives so I feel like I was always meant to get into the sport it was just a matter of when.” 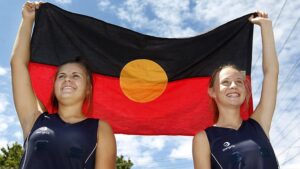 “I want to inspire the stories of people from across the world through netball and through my art, helping them connect to Australia’s First Nation’s Culture. This always was, and always will be Aboriginal land.”

Bayley’s journey continued as she played in the Victorian indigenous soccer team in a tournament in Alice Springs with her sister. A stranger approached the Bayley, sister Zali and their mum, Tina, asking if they knew about the Indigenous netball tournament coming up on the Gold Coast. The sisters had no clue about this tournament but soon joined the Victorian Under 16 team helping get the win over Queensland in the national title game.

A connection to landscape was the foundation for Bayley Mifsud’s Indigenous art career. “I was drawn to art early as I was naturally a creative child. I enjoyed sitting and learning about Aboriginal art from my Elders and found that I was surprisingly really good at it. Art is a way of storytelling for my people and is a way that the entire Australian community can connect and be educated about First Nation history, with this being the core purpose of why I do what I do.” 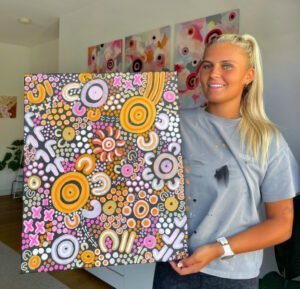 As the years went on, with a busy schedule of sport and work, Bayley didn’t create art again until 2020. She wanted to start her own business, and what better way to do so than through her desire to have contemporary Aboriginal artwork in her own home. “When the pandemic started, I found myself as I am sure a lot did with more time on my hands and gave myself a project of creating a piece which represented my family. This sparked a lot of interest from others wanting pieces made which kick-started my own business.” 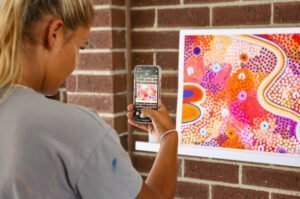 Growing and evolving as an Indigenous artist has encouraged many other businesses to reach out to Bayley, creating artwork not only on stationery items or art prints but for sporting equipment and attire. Involving her passion for sport, art and her culture has always been a goal for Bayley, so this was an amazing opportunity for her to showcase her talent and involve others in the culture.

“I see such a connection between being an Indigenous netball player and artist as I believe sport is such an incredible way to bring diverse communities together. We have seen this through all sports that cultural differences do not matter and when playing sports we all become equal. Culture is such a part of each individual’s identity and sport shares this identity and celebrates it in ways that all can be included. I have had the incredible opportunity to work with sporting clubs to develop artworks for jerseys, netball bibs and general uniforms which is such an incredible way to show support through the sport I love known as netball.” 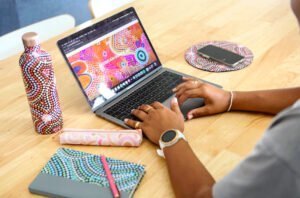 When she’s not on the netball court or with a paint brush in hand, Bayley works full time at Officeworks’ Support Office in Melbourne as the Indigenous Engagement Lead. Bayley was recently celebrated by Wesfarmers for her exceptional contribution to advancing reconciliation at Officeworks, being awarded the ‘Employment Champion’ alongside her team mate Angie Lie. Thanks to the work of Bayley and Angie over the past 12 months, the proportion of Aboriginal and Torres Strait Islander team members working at Officeworks now exceed the proportion of the Indigenous population in Australia (approximately three per cent).

Bayley is continuing to balance her work-life schedule with netball and in doing so, create awareness about Australia’s First Nations Culture. “My general goal is to educate and bring awareness about and to our First Nation people in whatever way I can. The Australian community is so blessed to have such a rich culture, the longest living culture on this planet known as our Indigenous people but we are yet to close the current gap that exists in our community. I want to continue such an important part of my culture through the storytelling of art and I want to share that with everyone in our community.”

You can support Bayley by following her journey on Instagram @Merindahgunya.art and checking out her Officeworks range in stores nationally.