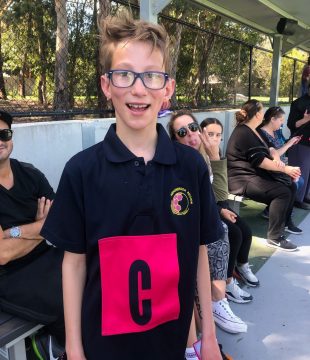 All Abilities Netball Back in the online space for Season 2

In celebration of Friday, 3 December All Abilities Day, The Sandringham District Netball Association (SANDY) netballers are back for Season 2 of the All-Abilities netball program with double the drills, double the fun & double the players!

Inclusion is not just about doing something alongside someone; it is about doing the sports we love together equally.

Over the past 4 years, SANDY has created so much more than an All-Abilities program; embracing diversity, community, developing friendships and connections between players, coaches and families.

The SANDY All-Abilities program was initially founded in 2018 by local coaches Emily Higgins and Kris Pierce, who are both mothers of children with disabilities. “We started a come-and-try program for boys and girls, with a range of disabilities with no prior experience necessary to be involved,” said Higgins. “We wanted it to be accessible and inclusive of everyone, to set the foundations for a strong program culture from the beginning,” Pierce added.

We were blown away with the messages of support, encouragement and thanks from netball clubs and associations across Australia after they had watched season one and heard SANDY’s story. “We already knew that we were a part of an amazing community club at SANDY, however, we were blown away by the excitement and love shown after our season 1 went live on the NETFIT App. Our young leaders embraced the challenge of season two of the All-Abilities Program,” a visibly proud Pierce commented.

The Senior program runs in conjunction with a local Adult Education Program, Bayley House on Fridays from 10 to 11 AM. “All the benefits that an individual reaps from playing netball should be the same benefits that those who have a disability experience. There should be no distinction between the two” said Pierce.

In furthering their commitment to change in society and helping other associations develop their own All Abilities programs, SANDY has partnered with NETFIT Netball to create season 2 of their “how-to” 7-part video resource. Led by the young SANDY coaches, these videos will be available as a free resource on the NETFIT App in the “Coach” section (Click through COACH > PROGRAMS > ALL ABILITIES).

NETFIT Netball Founder and CEO Sarah Wall is delighted with the outcome of season two and again congratulated the SANDY netball community on their achievements as an evolving club. “We hope that this season two resource helps other netball associations to set up an All-Abilities division that might not know where to start. I have again learnt so much from my time working on this season two project and my biggest takeaway is that no matter what community we are involved in, all we need is an opportunity to be seen and also heard.”

Downloading the NETFIT Netball App from the Apple or Google stores and registering as a user. The content can be found in the “Coach” section under its own sub-folder “All Abilities” at no cost.

For further information or to request an interview with Kris Pierce, Emily Higgins or Sarah Wall please contact:

PrevPreviousIt’s not just your muscles that need a warmup: Here’s how to prep your face
NextThe significance of all-Indigenous netball teamsNext