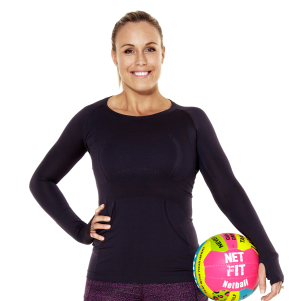 How To: Crush It Like An Elite Player With Kim Green

When you speak to most athletes, they are very measured. You see Netballers running around the netball court and sometimes get a glimpse into how they train and prepare their body for the Elite level but I wanted to give you an insight into some of the parts of being an elite netballer that you may not know or see…

These are the most dreaded days of the Netball calendar!

Most mornings start off with getting our skinfolds done. If you haven’t had this before, all you need to picture is a Dietician with callipers in hand.

Skinfolds are the most accurate way of showing how your body composition has changed over the course of a 6-week period. To see if the work in the gym has been working or if there needs to be tweaks in our diet.

After getting your results, off to the court we go.

As soon as you walk into the stadium, the nerves hit and you know you’re in for a big day of testing. We are tested on:

We normally would do this at the start of preseason, end of preseason, during the season (bye week) & end of season to show how each athlete is able to sustain their performance throughout the season.

We have an athlete monitoring system that is a way for our coaches, physios and medical team to keep up to date with how each player is feeling on & off the court. This monitoring system is all on an app on your phone and is a NON-NEGOTIABLE for every athlete.

We input information into this app 3-4 times a day depending on how many sessions we have throughout the day.

–      Training load (depending on how many sessions, you would individually record each session)

In some of my teams, if your morning wellbeing was not completed at least an hour before training, you would be asked to leave and not allowed to participate in training. Harsh, but fair!

This is one of the more frequent questions I am asked when talking about my career, and for good reason!

Drug testing is THE weirdest and awkward part of being an Elite athlete.

We know as soon as we walk into training or into a game if there are drug testers present. What this means is that we need to prepare slightly differently throughout the game or training. Let’s talk Game day!

For the most part you won’t know if you have been selected for a “random” drug test until after the completion of your game.  You would have prepped knowing that drug testers were present and slightly change your game day routine.

What this meant for me is that I wouldn’t go to the bathroom at half time, I would try and hold on until after the game to see if I had been the lucky pick or not- you want to be as hydrated as possible.

If you are the lucky winner of a drug test, you will also be told whether you have been selected for a Urine test, Blood test or both.

Once you have been told, you will have a Drug test Liaison with you EVERYWHERE YOU GO until you have finished your drug test!

Depending if you are ready or not, sometimes this test can take 5 minutes, sometimes it can take hours… and I mean… HOURS! I have been stuck for up to 4 hours trying my best to get the test done- Sometimes it’s not your night!

It is a very uncomfortable part of being a netballer but ensures clean & accountable athletes.

So, if you see someone in a black vest following us everywhere we go after a game, you will know that we are in for a long night.

Be the first to hear about NETFIT news, exclusive offers and discounts