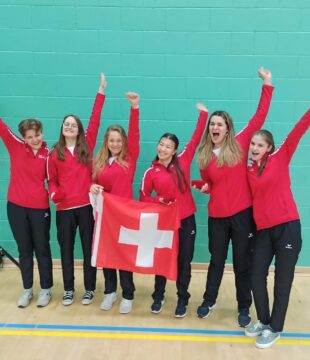 Following a strong online community connection through COVID, NETFIT Netball and Swiss Netball have announced they are forming a strategic digital partnership aimed at supporting the continued growth of netball in Switzerland.

As the governing body for Netball in Switzerland, full European and World Netball members Swiss Netball have developed a passionate netballing community, with sustained growth of their member base and performance standings in regular EU Competitions.  Swiss Netball has been passionate about supporting the development of this fast and fun sport across Switzerland and see the partnership with NETFIT as the ideal opportunity to continue that growth.

Emma Connolly, Swiss Netball President, commented on the strategic partnership, “Our brands align so closely in what we are each aiming to achieve with our communities, so working together to grow the game made perfect sense to us both.” Connolly further added, “With NETFIT’s range of online resources and community-focused fitness and coaching campaigns we saw the partnership as helping assist our coaches, complement our current players skill sets and help attract new players to the game in Switzerland.”

Having first worked with the Swiss Netball community through the INF (now World Netball) 24-Hour Live event in 2020, NETFIT Founder and CEO Sarah Wall was immediately taken by the proactive approach of the Swiss Netball Management team in engaging their people, “I’d seen the netballers in Switzerland on socials over the years and have been impressed by their commitment to the game, each other and desire to see their organisation grow domestically and on the global sporting scene.”  They embrace what the game should be, fun, friendly and positive, which makes this partnership exciting for our NETFIT Community.”

Wall added “NETFIT is a community of hope and inspiration. We believe in the power of activity and team work to bring out the best in people and the potential of those people to bring out the best in our world. Swiss Netball embrace what the game should be, fun, friendly and positive, which makes this partnership exciting and we can’t wait to welcome the Swiss netballers into the NETFIT Community.”

To celebrate the partnership NETFIT Netball are providing all registered Swiss Netball members with 2 months free access to the NETFIT App, where they can access over 450 fitness, coaching and skills videos to help improve their game. In addition to the free trial period, Swiss Netball members will have a welcome Coaching and Fitness Q&A webinar with the NETFIT team along with special discounts to a range of NETFIT products.

To learn more about NETFIT Netball, or to discuss how they can help support your programs please visit the website www.netfitnetball.com, contact info@netfitnetball.com or download the NETFIT App http://geni.us/netfit

To learn more about netball in Switzerland or to become a member of Swiss Netball please visit the website www.swissnetball.ch or contact Lauren Hoare, communications@swissnetball.ch