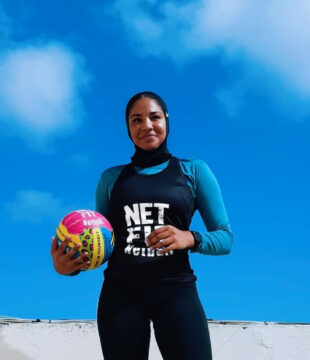 Hey NETFITTERS! My name is Sabrina Abugrin and I’m from Malta located in the Mediterranean Sea, south of Sicily (Italy). You might have already seen me on socials doing NETFIT workouts! If I were to introduce myself to you I’d say that my life revolves around sport and physical activity especially around netball which I am sure lots of you can relate to.

I feel responsible to make sure that the future generations have more exposure to the beautiful world of sports. For this reason I consider myself as a passionate coach. Apart from coaching a variety of different sports and educating kids of all ages about the importance of physical education, my other goal is to run a successful netball club someday.

To help make my dream a reality this season I have taken on the role of Public Relations officer for Fgura Champs Netball Club which is competing in the first division league in Malta. I began to create connections with my local football (soccer) club and this year I discussed and identified the issue which netball has in Malta, that is the lack of public relations and exposure of the sport to kids in schools. I truely believed in the benefits of joining the football and netball club uniting different sports to help uplift everyone as best as we can. 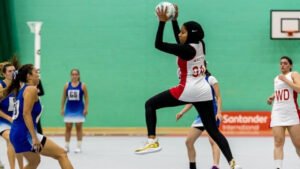 What has your sporting career looked like to date?

I have had a few challenges throughout my sports career. I have always been so eager to transfer my knowledge & understanding of sports and leadership skills to young children.

Being a young muslim sportswoman, starting sport at the age of 7 has shown me so many successes as well as obstacles along the way. But let’s be real that is life!

Have you had any frustrating moments over your sporting career?

At the age of 14, I started wearing the hijab (a headscarf which muslim women wear) while I was still playing basketball. After a few months I got to know that headwear was not permitted and therefore I was disallowed to play our league games.

This made me feel frustrated but I still committed myself to the team by training and watching and cheering each game. I felt that it was only fair to do that for myself.

Unfortunately this rule was also in football (soccer) at the time. A year later the headwear rule was removed and I was able to return to playing the following year.

How were you introduced to netball?

I started looking for another sport and my mother introduced me to netball. The first thing I looked for was the rule book to see if there was anything regarding headwear.

Thankfully there was none and for the first time I felt indiscriminate in a sport which is only played by women in Malta. My mother and I were the very first muslims to be playing netball in Malta. Bringing more muslim women into the game does not take much.

Adequate clothing is the main thing that is looked for. If the kit can be adapted according to the needs of the player then all is good. 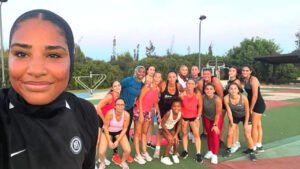 How do you want to break stereotypes in female sport?

Stereotypes is a major drawback for sportswomen here in Malta. We are diminished in our own world. As local netball athletes we can never be treated as professionals if the sport is not uplifted starting from media exposure. Another main stereotype is that men are more athletically gifted than women. We can never reach a professional level if women’s sports continues to be compared to men’s.

It takes a strong mindset to keep on working on your dreams even if the people around you seem to disapprove of all the work you’re putting into it. My first step towards breaking such stereotypes was to link my netball club to my hometown football team.

There is no doubt that football is a leading sport around the world. For our team it is very empowering to have the men’s football club members supporting us at games. Not only that but also with regards to the club management. The Malta Netball Association has upgraded drastically in management and as a club we are currently updating ours with the help of the football club’s president’s expertise.

Have you ever faced discrimination or racism, throughout your sporting career?

I cannot forget to mention the discrimination faced by women of colour. It is cruel to face racism while you’re doing something you love and live for. It can come in many way such as actions and verbal remarks. This must not be accepted.

I’m grateful to say that I personally have never faced racism in sport. We are underestimating the power of sport in promoting peace and unity amongst people of different races, beliefs and backgrounds.

As a muslim sportswoman of colour my purpose is to pave a way for the future generations to ensure a more welcoming and safer sports environment. 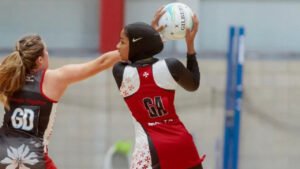 How do you think clubs can bring more Muslim players in to the game?

I think that sometimes people just assume that all this is easily achievable. I truly believe that the key to achieving your goals is to give everything you’ve got and not look back while keeping in mind that any hardships that come along the way are just obstacles that can be overcome.

I don’t always get the results I want after I put so much effort in my job. Sometimes it takes days and months or even years to be satisfied with the results. But when you’re passionate about it all that’s when you earn it.

It is the satisfaction you get when you give time in the whole process of achieving anything in life!

As a message I encourage all young muslim girls to never give up on the dream especially if it is to build a sporting career.

Sports is a powerful way to share a strong message: unity and respect. Never let anyone or anything make you feel disadvantaged or diminished because of your culture beliefs. Surround yourself with people who empower you the way you are.

Be proud of the woman you were culturally raised to be and don’t be afraid of using your hijab as your identity!

PrevPreviousDo you talk to yourself on the netball court?
NextSwiss Netball Partners with NETFIT NetballNext