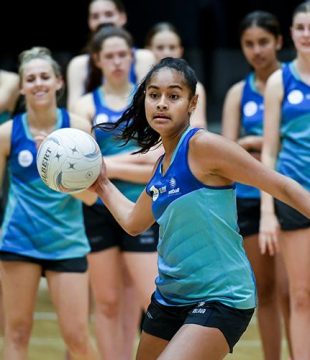 Having experienced interrupted netball seasons over the past 18 months, the ever-important Academy pathway program has been severely affected with the talented young netballers of NSW missing crucial opportunities to further hone their skills and develop their game under the watchful eye of Netball NSW’s Performance & Pathways team.

In an attempt to ensure that their netballers are given the best chance to strive to reach their individual goals, maintain motivation and stay connected Netball NSW have teamed up with leading digital and physical netball activation agency, NETFIT Netball to provide an “Academy vs Academy” lockdown fitness and skills challenge. The challenge is to be led by former elite netballers and Swifts & GIANTS alumni, NETFIT Founder Sarah Wall, and NSW State Manager, Taylah Davies and came about through the drive of Netball NSW General Manager Performance & Pathways, Margaret Hamley.

“We know how tough it has been on all netballers, particularly our NSW girls of late, and we were looking for a fun solution to help them remain engaged with the sport, their friends and teammates and to provide these talented young athletes with an opportunity to be challenged and grow, whilst in lockdown,” said Hamley.  “It is such an important period in their lives, both on and off the court, and we wanted them to know that we care for them and are here to support.” she added.

The challenge concept that NETFIT have successfully integrated through their partnerships with schools around Australia, while in lockdown this year, has been adapted to meet the performance needs of Netball NSW’s pathway program. NETFIT’s Wall and Davies will lead the personalised training and skills programs, with take-home support and session plans from the NETFIT App ensuring that the Academy athletes continue their learning in lockdown with some of the biggest names in netball.

“The challenge concept provides that extra bit of spark for the girls, who have missed the opportunity to get on court competitively with their teammates this season,” commented Davies. “We’re aiming to make these sessions challenging, and in-line with their high-performance programs, as well as fun and engaging, giving the girls the chance to connect with like-minded netballers from around the state.”

Netball NSW Executive General Manager – Community & Pathways, Darren Simpson, is understandably proud of his team in looking outside the box as they look to service the Netball NSW community through these challenging times. “We’re a proud netball state and a high-performing one too, which was evident at the weekend with both of our teams, the NSW Swifts & GIANTS Netball playing off in the 2021 SSN Grand Final.” Simpson added “Margaret (Hamley), Mardi (Aplin, Regional Manager Performance & Pathways Manager) and their team have done a fantastic job in bringing this program to life with NETFIT and we’re excited to see which Academy is going to come out on top in this exciting Challenge.”

The Netball NSW team have also extended an invitation to the Victorian-based SWAS Academy, also currently in lockdown, to join in the challenge and compare their skills to those of the NSW netballers. Wall, the Head Coach of the SWAS Academy, was delighted with the cross-state opportunity to test her netballers, against those in the NSW pathway system “Cross-state rivalries and politics go out the window when it comes to netball and looking after our girls, and we’re delighted to have the SWAS girls challenge some of the NSW girls, who hopefully will be playing against each other one day at the National Championships.” Wall further added “We have such a strong foundation in NSW already working with a number of schools and associations on a weekly basis, and Taylah Davies is so passionate about supporting her NSW community, so we see this partnership as being a great fit.”

Lasting 3 weeks and running each Sunday, all Netball NSW Academy participants will have received the invite link for the secure booking platform. For anyone seeking further information or to request an interview please contact: Margaret Hamley, MHamley@netballnsw.com or Mardi Aplin, MAplin@netballnsw.com

To learn more about NETFIT Netball’s physical and digital programs in Victoria, NSW, Queensland or New Zealand please visit their website (www.netfitnetball.com) or info@netfitnetball.com to request a meeting to discuss how they can solve your netball needs, either digitally or physically.