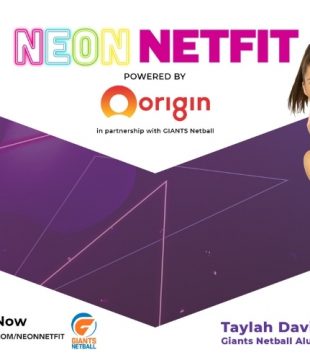 Ladder-leading GIANTS Netball are looking to continue their blistering on-court start form to the 2021 season through an exciting new partnership with digital and physical activation community, NETFIT Netball which will see them taking netball to regional communities in NSW with an innovative new concept, partnered by Origin Energy.

“NEON NETFIT” is the brain-child of former GIANTS netballer and NETFIT founder Sarah Wall, with her former GIANTS team mate and NETFIT NSW Manager Taylah Davies leading these high-energy programs throughout the State.

The event will comprise 2 x 90-minute glow in the dark netball focused work-outs at each location, for two different age-groups (7-13yo & 14+), all while adopting a “festival” style approach to netball with participants receiving a training t-shirt, glow bangle, ticket to a GIANTS home-game, 6-month access to the NETFIT App plus on-site activities all for just $50.

GIANTS Netball Executive General Manager Tim Underwood is thrilled that the team has qualified for finals with two rounds remaining and is excited to continue that momentum with NETFIT through this off-court initiative.

“GIANTS Netball places a high-value on the role that our regional communities play in supporting both grassroots and elite netball and we’re excited to be able to take this concept to so many parts of NSW,” said Mr Underwood.

“I see this [partnership] as being a perfect blend of visions as we roll these programs out with NETFIT and two former GIANTS players in Sarah and Taylah.

“They were both there with us in our inaugural season and are two passionate GIANTS and netball people.”

The support of Origin was crucial in allowing this “Regional Roadshow” to enter so many local netballing communities as they continue to show their support for netball.

In addition to the GIANTS Netball Regional Roadshow, Origin continues to be a great supporter of netball and community sport with its sponsorship of Netball Australia, the Origin Australian Diamonds as well as sponsoring seven of the eight Super Netball teams.

“We understand the value of sport for local communities around the country, particularly in regional areas, which is why we are thrilled to be able to help bring this important project to young and passionate netballers across regional NSW,” said General Manager or Retail Sales and Marketing at Origin, Duncan Permezel.

“Origin is proud to support this much-loved Australian sport and everyone involved in the game at all levels across the country. We want to acknowledge and support everyone from the young players and volunteers at local clubs, right through to the world-class Australian Diamonds,” he said.

Former elite netballers Sarah Wall and Taylah Davies are delighted to be able to get back out into the community following an interrupted 2020 through the effects of the COVID:19 pandemic.

“Local netball is the heartbeat of so many communities and as a country girl myself, I’m so excited that we can offer NEON NETFIT through the Regional Roadshow to so many young girls and boys who might not traditionally receive these opportunities in their towns” said Ms Wall.

NETFIT’s NSW Community Manager Davies added “Whether it be getting to Wagga Wagga, Coffs Harbour, Tamworth or Albury, we’re so excited to be able to get on the road and spark up the court at night as we celebrate netball and the fantastic run that the GIANTS are enjoying this season.”

With 16 Regional Roadshows being rolled out in NSW in the coming months, GIANTS Netball have left some locations “vacant” so that your community can express their interest in hosting one of the NEON NETFIT events. To learn more or register your interest please visit www.netfitnetball.com/neonnetfit