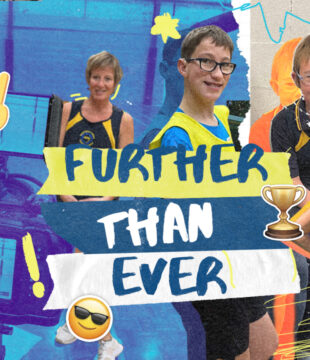 Following the success of the first two seasons of the NETFIT – SANDY (Sandringham District Netball Association) All Abilities digital netball series, these two passionate netballing organisations have again combined to release “Further Than Ever”, the third instalment of this popular netball resource.

Further Than Ever aims to challenge societal beliefs that AA netballers can’t participate like every other netballer, with the latest series featuring a number of familiar faces, embracing diversity, community and connection between players, coaches and families, all while keeping netball fun.

The SANDY All-Abilities program was initially founded in 2018 by local coaches Emily Higgins and Kris Pierce, who are both mothers of children with disabilities. “We started a come-and-try program for boys and girls, aged 9-14 with a range of disabilities with no prior experience necessary to be involved” explained Higgins. ”After the release of the first digital series we were blown away with the messages of support, encouragement and thanks from netball clubs and associations across Australia, which has driven us to continue creating opportunity and resources for everyone.”

The momentum gained through the first two series has helped expand the program, with the support of local coaches (mainly young players from SANDY) helping drive opportunity “Week in and week out these girls donate their time and energy to help create an enjoyable and inclusive environment for kids with disabilities.” Higgins commented “These girls just “got” the program from the beginning. They coached these kids just like they would coach everyone else. They taught them the fundamentals of skill development, positioning, teamwork and provided a level playing field for all netballers, of all abilities.”

NETFIT Netball Founder and CEO Sarah Wall is delighted with the outcome of season three and again congratulated the SANDY netball community on their achievements as an evolving club. “I have again learnt so much from my time working on this project and my biggest take away is that no matter what community we are involved in, all we need is an opportunity to be seen, heard and a chance to play.”

NETFIT Netball and SANDY were also able to host their first All Abilities School Holiday Clinic in the June/July holidays, running a full day of netball, nutrition and meet and greet with Olympic Champion Gronya Somerville.

In furthering their commitment to change in society and helping other associations develop their own All Abilities programs, SANDY have partnered with NETFIT Netball to create season 3 of their “how-to” 4-part video resource. Lead by the young SANDY coaches, these videos will be available as a free resource on the NETFIT App in the “Coach” section (Click through COACH > PROGRAMS > ALL ABILITIES). You can also hear the journey and stories of our young players through our social media, inspiring other young players to join a club or push to create one themselves.

Downloading the NETFIT Netball App from the Apple or Google stores and registering as a user. The content can be found in the “Coach” section under its own sub-folder “All Abilities” and is free to access.

For further information or to request an interview with Emily Higgins or Sarah White please contact: